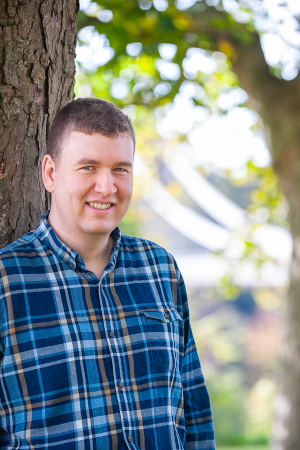 I grew up in the north-east of England, and I’ve been a musician since primary school, where I learned to play the cello – although to be completely honest I never really got along with it, and I’m sad to say that pretty much the last time I ever played it was the day of my Grade 8 exam. I always felt like I was fighting with my cello to get a sound out of it, rather than playing it: it’s a beautiful instrument, but it just wasn’t the one for me.

I first discovered the ukulele in 2006, through the work of the Ukulele Orchestra of Great Britain. I immediately took a liking to their style of musical comedy, and the wide-ranging nature of the music they played: because the ukulele is the “wrong” instrument for almost everything, you can ignore the traditional restrictions on what instrument you’re “supposed” to use, and use it to play almost anything in a way that you can’t really get away with on other instruments.

I eventually took up playing the uke for myself when a friend gave me a student model soprano, and told me I could keep it as long as I learned to play it. My only regret is that I didn’t start learning sooner!

The same friend introduced me to the English ocarina. If the ukulele if seen as an instrument with inherent limitations, then the ocarina even more so – it only has a range of a ninth! Yet it’s these limitations that drew me to it: I’m fascinated by the way you can take a severely limited instrument and make it do something fun, to find its boundaries and push them as far as they will go, and come up with something that no one has ever done before.

More recently I’ve taken up playing other styles of ocarinas as well; these have a slightly larger range, but not by much - the interesting limitations of the instrument are still very much present.

Nowadays I live in Bristol, and aside from my main work as a programmer and web developer, I play a variety of instruments. I’m most interested in the simple ones, and so I’ve chosen those as my main instruments of choice – yes I can play the guitar and the keyboards and all the other things you’d expect a musician to do, but so can everyone else: playing the ukulele with musicianship and artistic intent is much less common, and so to me it’s much more interesting.